I’ve played consoles for years but this one, this one is pretty great. The Nintendo Switch I think was pretty gosh darn impressive just from an execution standpoint.

I mean the switch was going to be the NX, a concept that they patended before they arrived to the switch design. 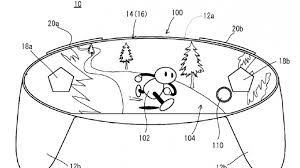 There would have been touch screen buttons, in this NX design concept

It does make me think about the niche that nintendo has had, in some ways people kind of expect nintendo to do “their thing”, which I think gives them a lot of power to attempt some very unique design concepts. Where as Xbox, Playstation and even Steam Machines have a very specific market and goal in mind. That’s not to say that Nintendo has it easy, quite the opposite in fact. Since it can be harder to arrive at a final destination if you are able to freely explore vs have strict guidelines. I’d be super curious to know what kind of iterations they had to go through to arrive at the final switch design.

I think my favorite thing about the switch though actually has to be just how detailed and efficient the hardware is. In the video below, this guy tears down his switch (oof) for youtube fame points.

But if you get past the cringe, you’ll see a really impressive use of space and unique computer parts in order to accomplish the portability and “power” necessary. They really had some goals to hit, and…I mean they hit them all pretty well:

Yeah I don’t have much else to say, I’m pretty glad to have gotten it, though I feel that back when I bought it there was the problem of not having enough 1st party Nintendo games. (Though frankly Zelda breath of the wild and Mario odyssey had plenty of content to go around for me to care less)

Anyways, enjoy some random clips I captured since I got the console.